Are motorcycles covered under the Virginia Lemon Law? 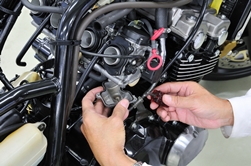 Owning a motorcycle is a life-long dream for many people and whether they ultimately choose a comfortable cruiser or a high-speed sport bike, they expect that their new purchase will have them out on the open road more than in the shop. However, like other new vehicles, motorcycles can experience mechanical problems that need repair. Fortunately, motorcycles are covered under Virginia’s Lemon Law, so the owner is protected when he purchases a defective bike.

What Vehicles Are Covered?

Basically, all new vehicles—and some used vehicles—are covered under the law, including:

In order to win a Lemon Law claim, you will have to show that your bike had to be repaired for the same defect three or more times in the first 18 months of ownership or it has been in the shop for over 30 days.  If it is a  life threatening defect then the law only requires 1 unsuccessful repair attempt.

According to a Consumer Reports motorcycle owner satisfaction survey, around 20 percent of owners report a significant failure of their bike within the first four years of ownership. While only the failures occurring in the first 18 months would qualify for a Lemon Law claim, it’s helpful to note that the following systems are most likely to fail on new bikes:

Your motorcycle dealership in Virginia should be familiar with the Lemon Law and should cooperate when you need to file a claim. However, if you are facing resistance, give our office a call. We will tell you if we can help.