Cautious consumers are justifiably wary of purchasing used cars, whether from an individual or a dealership. Since most of us are not trained mechanics, we can’t determine if a car is in good condition or not. We may be saving a lot of money over buying a new car, but is the car safe? How long will it run? In order to put buyers’ minds at ease, manufacturers inspect, refurbish, and “certify” pre-owned vehicles before offering them for sale on their used car lots. But what does it mean to certify a used car? As it turns out, it may not mean much.

The process of inspecting and certifying used cars began in the early 1990s as new car leasing became more popular and returned lease cars began to flood dealer lots. These cars were usually less than a few years older, had relatively few miles on them, and were in good mechanical condition. As a 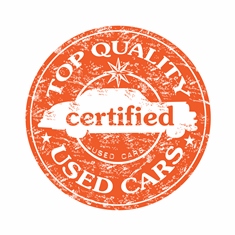 marketing strategy, manufacturers created their own inspection checklists and, when a returned lease passed the inspection, “certified” the car and resold it to consumers. This practice quickly spread to all of the major manufacturers.

Consumers trust that certified pre-owned cars are in good condition and are safe. The problem is that there is no federal standard for what must be inspected. Each manufacturer can certify a car based on criteria that they develop, which may not include an inspection of safety features or repair of recalled components. Even a car that has previously been in a crash can be certified by a manufacturer and sold as if it meets the particular criteria of the manufacturer.  Unfortunately, many dealers have a mechanic inspecting these vehicles to determine if they meet the "certification criteria" of these manufacturers, but these mechanics often are not collision repair experts trained to discover prior damage and these prior wrecked cars, that should not pass, are certified and sold to unsuspecting buyers who trust that "certified" means no prior wrecks and no mechanical problems.

What If a Car Has Been Recalled?

The Federal Trade Commission (FTC) recently filed a complaint against General Motors for certifying and selling used cars with open safety recalls. In other words, GM labeled cars with major unrepaired safety recalls as “certified pre-owned” and sold them to trusting consumers. Other used car dealers also participate in this practice. Disappointingly, in their negotiations with GM and other manufacturers, the FTC has backed down on their complaint and will allow cars with open safety recalls to be certified for resale as long as the dealer discloses somewhere near the certification claim that the car has been recalled. Under this deal, manufacturers will still be able to claim that their cars have passed a “rigorous safety inspection” and that they have been “repaired for safety issues” even if they have been recalled for a safety concern such as a faulty ignition switch or dangerous airbag.

Be Skeptical When it Comes to Used Cars

The lesson here is that consumers should always be skeptical of the condition of a used car, whether it is certified by the manufacturer or not. In most cases, used cars are purchased “as is” and not much can be done when faults are found after the fact unless the car was misrepresented during negotiations.  Before purchasing a used car, have a trusted mechanic inspect it and run the Vehicle Identification Number to determine if it has been in a crash or flood. If the seller will not allow you to take these steps, find another seller.