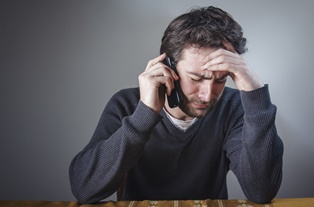 You may have received one of these calls yourself. You are past due on a credit card bill or a medical account and your debt is sold to a debt collection agency, who calls you in an attempt to collect on the debt. Unfortunately, many people report that these phone calls are not just a friendly warning, but can be downright threatening. We explain your rights in this situation here.

What the Survey Found

In an effort to better understand the interaction between consumers and the debt collection industry, the Consumer Financial Protection Bureau (CFPB) conducted a national survey of consumers. The survey found that one-third of all Americans—70 million people—were contacted by a creditor or debt collection agency in the previous year. From those respondents, the survey obtained the following results:

All of these interactions are uncomfortable at best, and illegal at worst. As a consumer, you have the right to not be harassed by debt collectors. Understanding these rights can help you protect yourself in the future.

Your Rights as a Consumer

Under the Fair Debt Collection Practices Act debt collectors are prohibited from the following actions:

If you are dealing with a debt collector who has broken these regulations, keep a record of violations and contact our consumer attorneys through the link on this page. We will let you know if we are able to help you end the harassment.