When considering a used-car purchase, there are a lot of issues to be aware of. The car could be a returned lemon, it may have 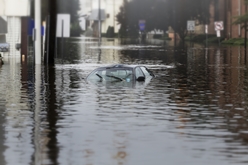 been involved in a collision, or it could have suffered water damage. Very often, cars like this are transferred to states other than where the damage occurred to avoid state disclosure laws. Even if the dealership you are working with has a good reputation, they may be selling a car they don’t know the true history of. You should always run a report on the car using its Vehicle Identification Number, but, beyond that, you can do a few things yourself to identify problems with the car—specifically problems caused by water damage.

10 Ways to Identify Water Damage in a Used Car

Despite a disreputable dealer’s effort to cover up the damage caused by flooding, there are often signs to be found if you know where to look. Use these techniques when checking out a used car:

If these checks turn up any signs of water damage, remember that there are plenty of other used cars available. Don’t risk buying a car that will have problems sooner rather than later. If you were sold a car that you later discover was a flood-damaged car, you may have grounds to take legal action against the dealer. However, it’s always better to thoroughly inspect the car before you buy it to avoid these problems.